Showing posts from August, 2010
Show all

Choose your partner with care 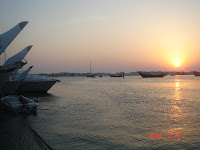 Last weekend we were at the beach and it was rather empty around. I guess most of the people were either at home as this is the holy month of fasting or did not think it was a good idea to be at the beach on this hot summer afternoon. While our daughter was reluctantly getting introduced to the Majestic Sea under the mother’s supervision, not at all amused by its vastness, I decided to take a lone stroll along the water. I spotted a dead fish on the sand I remembered two stories that keep having a significant impact on our lives. These are the fish story and the scorpion stories of life. I thought of sharing these with you as both of these are worth sharing. The Fish Story A small boy was once walking in the beach along the water and he noticed that as waves were crashing into the sand they were throwing hundreds of small fishes out of the water. Those little creatures had no hope of surviving. Then he saw a man who was picking a hand full of those fishes and letting them back in
5 comments
Read more

Kolkata - The City Of Joy

The Barber Theory Of Our Life

My brother has a way of elevating stories to the level of life defining theories . A few of those are so popular between us that these have become part of our life. I would like to share a few of those in the coming weeks will start with the Barber Theory. Barber Theory: One can do lots of things if he does not have complete knowledge . O nce upon a time there was a barber in a village. He was also the de-facto local surgeon who took care of all the surgical needs of the village. Operating seamlessly through any boils, tumors any other ailment that came across and his hand never trembled. So cheap and efficient was his service that professionally trained surgeon of the area started to get affected as no patients went to see him. He was sad and complained to his peers and friends. One of his doctor friends told him, “ Don’t you worry! I will fix it for you tomorrow.” The very next day the physician went and witnessed the barber in action. Once ther surgery was completed, he asked th
8 comments
Read more
More posts