Showing posts from June, 2018
Show all

If you had a choice, what would you dream about tonight?

Google image search T he other night I woke up in my dreams to find out that I was not actually asleep but wide awake . Although quite baffling, it is not very uncommon and probably many among us have encountered similar moments at some point in our sleep. Dreams are yet another aspect of our life, over which we have little control. We can accomplish many feats in our dreams which would otherwise appear unthinkable. “ Dreams come true ” is therefore synonymous to accomplishing something truly marvelous. All ancient culture tried to make sense of their dreams and their interpretation have been carried forward by their descendants. Depending upon happy or sad events that followed a particular dream, cultures created their own almanac of superstitions. We too have grown up drawing various inferences out of elements such as water, food, snakes, elephants etc. and associated action that appeared in our dreams. Our ancestors connected dreams to our previous birth, forewarning or
Post a Comment
Read more

A tribute on Father's Day 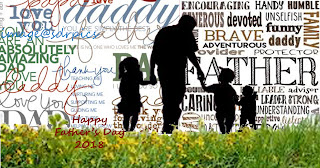 W hen we were small we believed that our father will protect us whenever we though we will fall. For us he was not only our superman but a super human. Its only after one becomes a father himself, that he understand a father's true vulnerability, weakness and his limitations. You realize the sacrifices he had to make while walking a tight rope as he struggled to maintain the balance between relationship, finances, priorities of life, time management et al. I remember the look my then infant daughter gave me when she was vaccinated for the first time. As if her eyes were questioning me, how could you ever let them hurt me ! When I look back at those wonder years, I understand my dad a bit more each time. But its too late as he left us for the heavenly abode as soon as I graduated and started with my job denying me the opportunity to give back anything. I wish he was still there and I could treat him, take care of him and hug him! Happy Father's Day wishes to o
3 comments
Read more 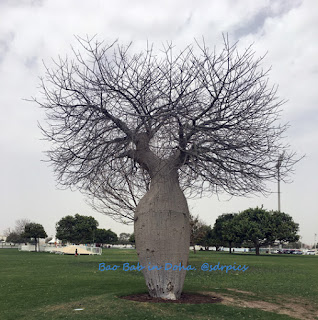 The name was not very common to my ears neither was its look to my eyes. Ever since I saw them at the Aspire Park in Doha, I might has asked my Landscape Architect friend umpteen number of times to remind me of the name of this tree. He used to give me the name with the questions, “why, what happened?” I always wanted to know more about them. I am told that we have a few of the species in some botanical gardens in India but incidentally never got to see one. “There are  nine species of baobab  in the world, and Madagascar, one of the world’s biodiversity hotspots, is home to six. The African mainland and the Arabian peninsula have two, and Australia has one. Africa’s most notable species is the  Adansonia digitata , named after the French botanist Michel Adanson, who undertook an 18th-century exploration of Senegal. He stayed there for five years and contributed to the publication of 1757’s Natural History of Senegal.” theguardian.com ) The shape of the trees are fascinati
3 comments
Read more

The most explicit definition of Sustainable living that I ever came across is the following: “Meeting our present needs in a way such that the coming generation would be able to meet their own.” Our generation is selfishly rushing to achieve their self-defined illusive “Progress”. In the process we are mercilessly converting our farmlands, wetlands, forests and water bodies destroying the natural habitat of our co-dwellers in this earth. On the 5 th of June 2018, this World Environment Day, I request all to take a moment out to decide where we want to go from here. We need to be wary of finding our environmental report card in the hands of our grandchildren and decide between growth and development. Growth is all about getting bigger and bigger whereas development is about getting better. I have no qualms in accepting the fact that it will take a messiah to change the world totally and revert the damages already done. But no one can stop us from participa
2 comments
Read more
More posts