Showing posts from February, 2017
Show all

Is there a good word 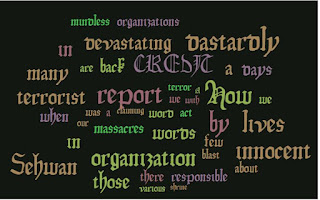 How responsible are we with our words when we report about those mindless massacres by various terrorist organizations. A few days back there was a devastating blast in a shrine in Sehwan claiming many innocent lives. I read a report the following day on this deadly attack. It read somewhat like this: “ Over 100 people died when a suicide bomber blew himself up at the shrine in Sehwan in the outskirts of Hyderabad city in Sindh. ISIS has taken credit for the attack that prompted the new Army chief to swear revenge ”. Finding a news article on a fresh Violent incident has become too routine an affair and it no longer leave a lasting impact in the conscious mind, even though it goes on to instill another dose of fear in our subconscious mind. But I was quite annoyed to read that “ISIS has taken CREDIT for this heinous act. Credit since my early days has been associated with “praise, approval, or honor”. “She got her due credit for the invention or her boss took the credit ins
Post a Comment
Read more
More posts